More than 3,600 havocs were sent to Russia under lend-lease, which was almost twice that sent to the British, and substantially more than the 1,962 aircraft delivered to the United States Army Air Forces.

This was the second most produced aircraft of the US during WWII, only after B-25 Mitchell. Havoc was probably the most supermodel bomber in the whole US bomber truss which was usually of a large shape. From a distance, Havoc has a look no different from some 2-engine fighters.

In fact, Havoc has such a slender body that it’s impossible to change positions between the crew, so in the position of the gunner there is also the joystick to fly the plane in case the pilot gets hit. Over 7800 units were built. It never gained the fame of the B-25 Mitchell.

Havoc was very popular with American pilots due to its excellent flight performance and extremely easy to control. An inexperienced pilot can still fly Havoc easily, as opposed to the Marauder. Despite using the weakest engine, but thanks to his slim body and excellent aerodynamic design, Havoc was the fastest aircraft in the US main bomber, with speeds up to 538 km/h. This speed along with the ability to fly well helps Havoc get a chance to escape when encountering interceptor fighters, especially destroyers like the Me110 or J1N Gekko, which is no faster than Havoc.

Constructed as a light bomber but more or less operated as a heavy fighter, the Havoc proved to be a successful addition to the Douglas company line and the Allied war effort as a whole before eventually being replaced by the more capable Douglas A-26 Invader and Northrop P-61 Black Widow.

The biggest disadvantage of Havoc is that the aircraft has the lowest bomb load in the US main bombers. The Havoc, had the least number of crews during WWII, 2-3 people, only equivalent to a heavy fighter or night fighter.

The A-20 began life as the Douglas Model 7B, a light bomber powered by a pair of Pratt & Whitney R-1830 S3C3-G Twin Wasp engines with a capacity of 1,100 horsepower. Type 7B has good maneuverability and fast flight, but has not attracted orders in the US.

Despite the failure, the aircraft attracted the attention of a French Procurement Committee visiting the United States – and placed hundreds of Model 7Bs for immediate production in February 1940.

Although not the fastest or longest-range aircraft in its class, the Douglas DB-7 series distinguished itself as a tough, dependable combat aircraft with an excellent reputation for speed and maneuverability.

When France collapsed under German power, some 95 French-operated DB-7s escaped to North Africa while the rest of the US hands – and contracted with them – was transferred to British ownership, These aircraft were designated by the British as Boston.

The RAF chose about 100 of these Boston light bombers and produced “Havoc”. Although originated as an American plane. Havocs was first controlled by No. 23 Squadron.

There were several variants of the Havoc. The Boston I was powered by two Pratt & Whitney R-1830 engines and was completely equipped to French specifications. Its high speed was its only asset and it was equipped as a night fighter with eight 7.62mm caliber machines guns mounted in the nose.

All DB-7 versions were known to the British as the Boston. The British later converted their Bostons to radar equipped night-fighters and theses were collectively known as Havoc. The United States Army Air Forces referred to the plane as the A-20 Havoc, and the reconnaissance version as the F-3.

The basic design of the A-20 was quite popular at the time with the deep cylindrical fuselage and cantilever monoplane wing in the middle, under each wing containing a radial three-propeller engine.

The empennage was traditional, equipped with a vertical stabilizer and horizontal cantilever planes. The undercarriage has three wheels in which the two main wheels concave into each engine shell and a single wheel in the rear of the cockpit floor. The engine nacelles on either wing assembly came to a point well past the wing trailing edge, giving the A-20 its distinct top-down silhouette.

Overall, the aircraft has a suitable structure for its work, proving to be a success for Douglas. Like most larger aircraft during World War II, Havoc’s airframe was specifically designed to withstand the damage and still keep her crew alive. The airframe also appears to be adapted to a variety of internal weapons and systems.

Weapons were changed during the war. Standard weapons include a combination of four 12.7mm machine guns mounted in the nose of the aircraft providing attack power. In the position of the back also attached a pair of such machine guns.

Internal bombs will be used to increase destruction efficiency – up to 1.8 tons of bomb load – part of this load can be used for additional fuel.

Visibility for the Havoc was good from the cockpit and stall characteristics were considered docile and it handled very well during low flying operations.

Note that the A-20 is actually designed as a light bomber, but it was often used as a medium bomber. The cockpit is designed with glazed canopy, providing great views forward, above and to the sides. Doors are mounted along the starboard side of the frame and allow easy access to the seat.

Flight control is done through a traditional control wheel mounted on flexible columns. Gun buttons, throttle control buttons and propeller controls are reasonably arranged and easy to access. The dials and gauges are placed in a position with good visibility.

The pilot can access the controls of the fuel tank, bomb selector, radio and cockpit heating right on his seat. Overall the cockpit is highly appreciated by both American and British pilots.

Soviet airmen almost unanimously agreed that the Havocs met and often times exceeded their requirements for a light, twin-engine bomber. It was fast, maneuverable, and easy to fly. One Soviet airman, Pa-vel Mee-khai-lo-vich Rozh-ko, recalled, the advantage of the Boston was that it had a steering wheel in front, and was much easier to control, and they were really fast. However, the highest praise given to the aircraft was its reliability and forgiving nature, especially when compared to the Soviet-built Petlyakov Pe-2 dive bomber. Its ability to fly on one engine was especially valued by all Allied pilots who flew Havocs, not just Soviet airmen.

After Japan’s surrender, many of the Soviet Union’s A-20s were decommissioned and scrapped, though not all. In the late 1940s, several Bostons were converted into VIP transports and utility aircraft, and the Northern Fleet continued using their Havocs as torpedo bombers until 1954!

Despite the fact that the Havoc was used extensively by Soviet forces in the victory over Germany, the memory of its role is, unfortunately, either tainted by Cold War rhetoric, or forgotten altogether.

The Douglas A-20 is often times overlooked by aircraft enthusiasts from all countries, but from North Africa, to the Mediterranean, Western Europe, Eastern Europe and the Pacific, the Havoc was a fast, capable, and reliable aircraft that quietly and effectively served a number of vital functions which ultimately helped the Allies achieve victory over the Axis. 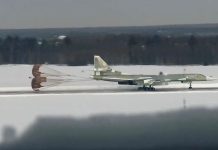 Northrop F-5E Tiger II: When You Need A Cheap But Versatile Fighter

Avro Vulcan: More Powerful Than B-52?

P-40 Warhawk: Disadvantage But Still A Formidable Fighter of WW2

F4F Wildcat: A Stalwart And Deadly Fighter of World War 2

SB2C Helldiver: The Big-Tailed Beast Of The Allies in WW2

F4U Corsair: One Of The Greatest US Fighters Of All Time

Do Tu-22M3M and Kh-32 Have Enough Power to Intimidate The US Navy?

China expert: Those who are “ignorant and arrogant” in India will not dare to...

Polish Leopard 2 Will Be Delivered To Ukraine: Urging Other Allies...