Powerful firepower, high maneuverability, combat capability in all terrain conditions, weather, attack helicopters are being used more and more all over the world today. Among the most powerful attack helicopters in the world, it is impossible not to mention the A129 Mangusta.

A-129 was produced by Agusta of Italy, later AgustaWestland. It was the first specialized attack helicopter designed and built entirely in Western Europe at the request of the Italian army in the mid-1970s of the last century. The A-129 is also the first attack helicopter in the world to have an advanced digital MIL-STD 1553B databus, which enhances the automation of the helicopter, significantly reduces crew workload.

The idea of an Italian Army attack helicopter was conceived in 1972. At that time the West German Army had a similar need, which led to a joint project initiated between the Italian company Agusta and the West German MBB company. However, the West German involvement was short-lived, after which they developed their own Tiger helicopter. Left alone, Agusta continues the project. In 1978, Agusta officially began the design process for what would become A129.

The first flight of the new helicopter took place in 1983, and since then, mass production has begun, so far about 60 A129s have been produced. A derivative of A129, T129 ATAK, is being developed by the Turkish Aerospace Industries in cooperation with AgustaWestland. The T129 will be produced for the Turkish Army and for export customers.

In terms of design, the A129 shares many similarities with Agusta’s previous A109 utility aircraft. Looking at the appearance of the A129, one will think of the American AH-64 “Apache” tank killer, a design that seems to have become a standard for attack helicopters. The two crew members were seated in tandem, the weapons officer sitting in the front cockpit and the pilot in the rear, a little higher. The rear part of A129 is taken from A109 and incorporated to an entirely new forward section. The fuselage of the A129 is very angular and armored for ballistic protection, the composite rotor blades are also able to withstand hits from 23mm cannon fire.

A-129 has a length and height of 12.28 m and 3.35 m respectively, empty weight of 2.5 tons while maximum takeoff weight is 4.6 tons. Power is provided by a pair of Rolls-Royce Gem 2-1004D turboshaft engines, delivering 890 horsepower each, driving a four-bladed main rotor and two-bladed tail rotor. The engines have been designed to incorporate infrared heat signature reduction measures. The Italian helicopter can reach a maximum speed of 278 km/h, a stable cruise speed of 229 km/h.

One of the key protective measures incorporated onto the A129 include the electronic warfare and SIAP self-protection suite. Elements of the mission interface systems and the onboard software integrated onto later aircraft were produced by Selex Galileo.

The A129 is equipped with infrared night vision systems and is capable of operating at day or night in all-weather conditions. Laser systems are fitted onto newer aircraft for range-finding and target designation purposes, the A129 can laser-designate targets for other friendly aircraft to attack. On the AW129D, Rafael Advanced Defense Systems’s Toplite III sight is used as the primary targeting system; it is able to act as a FLIR and has both manual and automatic target tracking modes, Toplite also provides a greater detection and identification range than the 1970s era HeliTOW sensor it replaced. In 1998, Israel Aircraft Industries formally partnered with Agusta to offer various avionics and weapons upgrades to potential A129 operators; various technologies have since been proposed and implemented on Italian A129s.

The A129 can be used in the anti-armour, armed reconnaissance, ground attack, escort, fire support and anti-aircraft roles. For the anti-ground mission the helicopter can employ various armaments, such as up to eight Hellfire missiles. In the air-to-air role, the FIM-92 Stinger missile was certified for use in 2003. The A129 can also be equipped with 81 mm or 70mm unguided rockets; a M197 three-barrel 20 mm cannon is also installed onto a nose-mounted Oto Melara TM-197B turret. By 2014, the Spike-ER, a fourth-generation anti-tank missile, had been added to the A129’s arsenal.

The A-129 Mangusta usually operates in conjunction with the AB 412 or AB 205 helicopters, which have been used in various combat operations, including participating in UN peacekeeping operations in the Republic of Macedonia, Somalia and Angola. A-129 is suitable for the role of peacekeepers and very suitable for activities in hot climates, with high reliability and extremely flexibility.

A129 helicopters were deployed in Iraq to provide close air support for Italian forces in Nassiriya. Several A129 aircraft have also been deployed in Afghanistan to support in-theatre operations by Italian and allied forces. In March 2016, the Italian government announced that it was deploying four A129 attack helicopters and four NHIndustries NH90 transport helicopters along with 130 personnel to the Kurdistan region of Iraq to perform combat search and rescue mission as part of a multinational effort to help combat Islamic State militants within the region and specifically to protect the Mosul Dam.

The current A129 versions are still being upgraded by Italy. Upgrade packages will focus on increasing the endurance, speed, situational awareness and information processing capabilities of the A129. Other goals include reducing the pilot workload and integrating the aircraft with future tactical drones.An revealed alternative that has been reviewed and rejected is the replacement of A129 with an attack-oriented variant of the newer AgustaWestland AW149 helicopter. Upgrading the current A129 is considered to be less risky, saving money and development time.

AH-6 Helicopter – A Little Bird, but with martial arts from the US Army

T129 ATAK – Turkish version of the A129 Mangusta Attack Helicopter 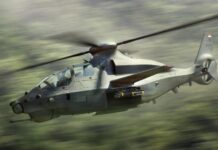 AgustaWestland AW101 – The most powerful, modern and most expensive medium-lift heli in the world

RSS Stalwart (72) – The power of Singapore’s most modern frigate

HMNZS Te Kaha – An Anzac Class frigate which be part of New Zealand’s...

Black Eagle T-80UM2 – A super tank with outstanding power, but...