In addition to Admiral Gorshkov, in the next few years, the Russian Navy will receive three more ships of the project 22350: Admiral Kasatonov, Admiral Golovko and Admiral Isakov.

The Admiral Kasatonov is a new generation frigate belonging to Project 22350, Admiral Gorshkov-class. The vessel was professed to be the “Master of the Sea” by Russian military leaders, due to the world’s leading advanced features and its powerful weapons system.

In addition to Admiral Gorshkov, in the next few years, the Russian Navy will receive three more ships of the project 22350: Admiral Kasatonov, Admiral Golovko and Admiral Isakov. These frigates will be equipped for the North and Pacific fleets. In addition, two were ordered, but not yet started.

The 22350 frigate project is the first large surface water warship built in Russia after the collapse of the Soviet Union. They will become the most modern and complete surface ships of the Russian Navy in this class. Currently Kasatonov is in the process of testing in the Baltic Sea which will be handed over to the Russian navy in late 2019. The ship is built in stealth technology, smart electronic devices and equipped with powerful weapons.

As of now, Admiral Kasatonov is the newest frigate of the Russian Navy and the second Admiral Gorshkov-class ship and is about to join this force in 2019.

In July 2003 Russian Naval Command approved the basic design of the frigate. It was developed by Northern Design and Development Bureau in Saint Petersburg. The design is based on the Krivak IV Class frigate developed by Russia for India and incorporates stealth technology.

Unlike her Soviet-era predecessors, the new ship are designed for multiple roles. She is to be capable to execute long-range strikes, conduct anti-submarine warfare and to carry out escort missions.

The total displacement of the frigate is 5400 tons, overall length of 130m, a beam of 16m and a draft of 16m. They have operational ranges of more than 4,000 miles. They can accommodate about 200 crew members.

The frigates are equipped with Combined diesel and gas propulsion systems. The system delivers the high fuel efficiency of diesel engines when cruising, allowing greater range and lower fuel costs than with gas turbines alone. The two cruise gas turbines and two boost gas turbines will be connected through two shafts, provides a maximum speed of 30 knots.

A flight deck and hangar in the back of the ship allowed a Ka-27 helicopter to be carried. This is a military helicopter developed for the Soviet Navy for ferrying and anti-submarine warfare. The latest modification of the helicopter is equipped with the following systems: acoustic, magnetometric, signals intelligence and radar with active phased array antenna FH-A. Radar mounted under the fuselage provides all round visibility in the search and detection of surface, air and ground targets.

The main strike armament is the cruise missile complex. There are a total of 16 Vertical launching system cells for Kalibr, Oniks or Zircon missiles.

The Kalibr is a supersonic cruise missile available in land-attack, anti-ship, and anti-submarine variants. The anti-ship variants have a range between 270 and 410 miles, and are designed to skim low over the sea to avoid detection, performing evasive maneuvers instead of making a straight-line approach. Getting close to the target, missiles accelerate from their cruising speed of Mach 0.8 to Mach 3, and descend to just 4.6 meters, making it extremely difficult to shoot down.

The vessel also be fitted with 8 of 330mm torpedo tubes for anti-submarine torpedoes. In addition, the ship is also equipped with a new 130mm gun mount, 2 Kashtan 30mm close-in weapon system gun and 2 of 14.5mm MTPU pedestal machine guns.

In general, the new Russian ship has very strong firepower, the Russian Navy’s new approach to force development has contributed to the superiority of Russia’s latest ships over their foreign counterparts.It can be said that this Russian program is an illustration of a major achievement of Russian shipbuilding industry capable of providing the Navy with cutting edge multi-purpose warships.

Erradii Class – The 2 Most Advanced Meko A200 Frigates of Algeria

Ladny – The Frigate From The Soviet Era But Still Useful Today

Type 23 Frigates: The Once Mighty Force of the Royal Navy and Still Useful To This Day

Udaloy-class: This Why the US Navy afraid of Russian Submarine Hunting Destroyers

Hetman Sahaydachniy Frigate: How is the iconic flagship of the Ukrainian Navy now? 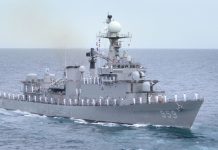 Type 053H3 Frigate: Preparation For Competition With The US

KORKUT SPAAG – The Turkish Assassin From the Future

Marshal Shaposhnikov 543 – Russian Destroyer Is Armed to the Teeth...