BMD-4 was manufactured and put into use in late 2004, its only operator is Russia. The vehicle was developed based on the chassis of BMD-3 but changed the weapon system, therefore it was originally designated as BMD-3M, but later re-identified as BMD-4.

Imagine an infantry fighting vehicle that can be deployed from the air with a standard combat crew of 5 soldiers, fully equipped and ready to fight right after landing. That would be unthinkable for any airborne force of any country, but workable for BMD armored vehicles of the Russian Airborne Forces. These “flying” armored vehicles was greatly developed by the Soviet Union after World War 2, especially when they needed an elite parachute fighting force. Soviet military strategists found that if it was possible to bring infantry fighting vehicles deep into enemy territory, that would be a great advantage. The new military doctrine was quickly approved by top Soviet military officials.

Since 1970, the Russian army has possessed a special force of armored fighting vehicles with unique abilities: skydiving. To “fly” like that, each armored vehicle will connect to a giant parachute and drop from transport aircraft. The armored vehicles of Russia’s BMD are armed to the teeth with automatic cannon, machine guns and anti-tank missiles. Although a product of the Cold War, Russia still possesses a significant number of BMDs on the payroll.

BMD-4 is the product that inherits the qualities of previous MBD generations, and it is still being modernized. The latest version of the BMD family, the BMD-4M, was introduced in 2008 and has been delivered to the Russian army since 2014.

BMD-4 was manufactured and put into use in late 2004, its only operator is Russia. The vehicle was developed based on the chassis of BMD-3 but changed the weapon system, therefore it was originally designated as BMD-3M, but later re-identified as BMD-4. This is an armored fighting vehicle of the lightest type and is one of the most heavily armed of the BMD line, possessing considerable firepower compared to its rivals.

The design of the BMD-4 is basically a development of BMD-3, so the ergonomic characteristics and position of the crew members remain unchanged. The hull of BMD-4 has a strong resemblance to its predecessor but with some improvements. The vehicle weighs 13.6 tons, the hull length is 6.1m, the width is 3.11m and the height is 2.45m. The hull is made of aluminum alloy instead of steel. This armor can protect BMD-4 from 30mm weapons, small arms fire and artillery shell fragments.

BMD-4 has a crew of three including: commander, gunner and driver. It can carry up to five passengers and is more spacious than the original BMD-1 and BMD-2. The suspension consists of six small road wheels and four track rollers on each side. The vehicle has an automatic transmission with five gears for forward and five gears for reverse. An NBC protection system is provided for the entire crew and passengers to ensure the ability to survive in environments with nuclear dust. An automatic fire extinguishing system ensures that direct hits to the hull and turret do not detonate internal artillery shells, keeping crew safe.

The engine of the BMD-4 is placed in a compartment at the rear of the hull. A 2V-60-2 diesel engine producing 450 horsepower, providing the vehicle’s power to reach speeds of 70km/h on the road, the range of the operation is 500km. BMD-4 is also fully amphibious with two water jets mounted on either side of the hull and can swim at speeds up to 10 km/h. With a high power-to-weight ratio, the BMD-4 has the ability to accelerate faster than other infantry fighting vehicles. The BMD-4 can maneuver on a 60 degree gradient and a 35 degree side slope, it can cross 1.8m trenches and climb 0.8m tall obstacles. The suspension of this vehicle is hydraulic and can adjust the distance to the ground.

Like its predecessor, the BMD-4 is capable of skydiving with the entire crew and passengers inside the vehicle, allowing them to engage the target immediately after landing. The vehicle can be transported by Il-76 transport aircraft or heavy helicopter.

The main difference between BMD-4 and its predecessors lies in its weapons. The vehicle equipped with a full 360 degree traverse Bakhcha-U turret, including: a 100mm 2A70 low pressure rifle gun, a 30mm 2A72 coaxial autocannon, and a 7.62mm PKT coaxial machine gun. Most armored or non-armored targets can be destroyed by the weapons provided by the Bakhcha-U turret.

The 2A70 cannon has the ability to fire high explosive fragmentation rounds and laser guided anti-tank missiles. There are 34 unguided high explosive fragmentation shells are carried in the vehicle’s turret, ready to fire. The 100mm gun is equipped with an autoloader that fires at a rate of 10 to 12 rounds per minute, reload time for each shell is 5 to 6 seconds. The 100mm gun is also capable of firing Arkan 9M117M1 anti-tank guided missiles. Weighing 21.5 kg, this anti-tank guided missile can penetrate 750 to 800 mm Rolled homogeneous armour behind the explosive reactive armor. The turret contains four missiles and is fired through the 100mm gun, ensuring an important advantage over other infantry fighting vehicles.

The 30mm 2A72 automatic cannon is coaxially mounted with the 2A70 rifle. A total of 500 bullets are ready to be used with 245 of them being high explosive and the rest being armor-piercing discarding sabot. The bullets fired can penetrate 22 mm of rolled homogeneous armour from 2000m. The PKT 7.62mm machine gun is coaxially mounted with 100mm and 30mm weapons, 2000 rounds of ammunition are ready. To counter infrared guidance and weapons, six 81mm ZD6 smoke grenade dischargers in two banks of three are mounted towards the sides of the turret.

The BMD-4 features an advanced fire control system. The BMD-4 is able to fire all its primary armaments effectively regardless of whether the vehicle is stationary or mobile, whether the time is day or night, or whether it is afloat or land based. The vehicle commander’s panoramic sight has an azimuth coverage of 360 degree to search for targets. This panoramic sight features thermal imaging and range finding channels with a range of up to 10 km. The BMD-4 has hunter-killer capabilities and the gunner is able to use the commander’s sight to engage targets if his own sight is disabled or destroyed.

Although highly appreciated, BMD-4 still has its own problems. This armored vehicle weighs 13.6 tons compared to BMD-2 with only 8 tons. One Il-76 can only transport two BMD-4 at a time, not to mention the number of soldiers and equipment parachute system attached. Currently the BMD-4M has completed basic testing and is being delivered to the Russian Army. A total of 132 airborne infantry fighting vehicles BMD-4M and 58 BTR-MDM Rakushka armored personnel carriers will be delivered to Russian Army.

Beyond 50 years OLD, T-72 MBT is still ROAMING on all battlefields 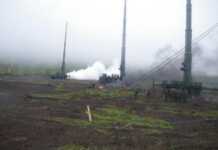 Why do people DREAM about the Russian TERMINATOR?

What upgrade does the Su-57 need to become a carrier-based fighter?

What kind of weapon will become the game changer for India? S-400 or Rafale

Why is China still Lack of Weapons despite its Huge Defense Budget?

Not China, JAPAN is the MOST powerful air force in Asia

Nigeria Received JF-17 – Was It A Mistake?

LAV-25 – Pioneering Cavalry of the US Marines