The formation and development of BMPT Terminator was the result of the difficult wars of Afghanistan and Chechnya.

Russian-made tanks and armored vehicles are renowned for their durability, ruggedness, and maneuverability over all obstacles. These combat vehicles have been exported around the world.

After the Cold War, stemming from the need to fight in urban battlefields, the Russians continued to inherit Soviet scientific achievements and launched a tank-based fighting vehicle called the BMPT, also known as the terminator. It is designed for supporting firepower of tanks, destroying light armored targets, and can be used against light aircraft and helicopters, if this opponent’s vehicles are low enough. It is heavily armed and is capable of surviving as a main battle tank in urban environments.

The formation and development of BMPT Terminator was the result of the difficult wars of Afghanistan and Chechnya. On the Chechnya battlefield, the Russian Army in the attack on the Grozny capital suffered great damage because of the wrong tactics.

At that time, tanks moved between two rows of high buildings without infantry attached. They become a good prey for ambush RPG gunmen and shoot down from above, aiming at the position of the thinnest armor.

A series of damaged and destroyed T-72 and T-80 tanks led the Russians to quickly research a new vehicle. This type of vehicle was required to have a light, maneuver turret, on which a sufficiently powerful weapon and a large firing angle were needed to hit targets where the main gun on the tank was difficult or impossible to fire.

That was the premise for the launch of a Tank Support Fighting Vehicle, the BMPT Terminator. From the official launch in 2002 until the upgraded BMPT-72 Terminator-2 was introduced in 2013 or most recently BMPT-72 Terminator 3, despite some structural changes but the philosophy Design logic remains the same.

Terminator is a product of the Uralvagonzavod group. The development of the vehicle was conducted in the late 1990s and was officially put into service in some countries from 2011 to the present. The first version of Terminator used the chassis of T-90 tanks, making the price high.

As a result, this combat vehicle was deemed unsuitable for mass production in the Russian army as well as for export. The chassis of the T-72 main battle tank was later chosen as a more economical alternative. T-72 is a tank used by the Russian army in large numbers and has been produced under license by many countries.

The Terminator 1 weighs about 53 tons, the crew is a team of five with the driver sitting in front of the vehicle in the center. The two sides of the driver are the position for the 30mm grenade operator, commander and gunner are placed in the turret.

The protection of BMPT is superior to most other tanks because it is protected by active and passive defensive measures. Its armor is made of composite material, steel and reactive armor, which protects the crew by anti-tank munitions.

BMPT is equipped with V-92S2 diesel engine located at the rear, providing 1,000 horsepower with liquid cooling and supercharging. The vehicle shares a suspension with the T-72 main battle tank, each side consists of six roadwheels with the idler at the front, drive sprocket at the rear and three return rollers supporting the inside of the track only.

Terminator has the full standard of a modern combat vehicle, including NBC system, fire detection and extinguishing system. The vehicle has a multi-channel fire control system, combining optical and thermal imaging channels and a laser detection system. Gunner and commander can identify small targets at long distances, in all weather conditions, day and night.

BMPTs are considered Terminators on the battlefield, because of the terrible number of weapons it carries. The Terminator is armed with two 30mm 2A42 cannons mounted on the top of the hull, a 7.62mm PKTM machine gun mounted above the cannon.

On either side of the turret are two rocket launchers for Ataka anti-tank guided weapon. These missiles have a maximum range of 5.8 km and can be equipped with a variety of warheads including tandem high explosive anti-tank, thermobaric and continuous rod high explosive.

The BMPT is also equipped with two 30mm AGS-17 automatic grenade launchers. The turret can be rotated 360 degrees through the electric motor, the firing angle of the weapon is wide, can reach every corner of the battlefield.

There are also five 81mm grenade launchers mounted on each side of the turret.

The new BMPT-72 Tank Support Fighting Vehicle, also known as Terminator-2, was built to overcome the shortcomings of the previous generation BMPT Terminator. The 9M120 Ataka anti-tank missile launchers have an additional protective layer, in addition to the Terminator-2 also equipped with a new engine and fire control system. The manufacturer removed the AGS-17 grenade launcher from the weapon system, reducing the number of crew members to three.

In 2017, the Russian army sent BMPT-72 to Syria to test in combat conditions during the anti-terrorism campaigns in this Middle Eastern country. After the actual test, the Russian Ministry of Defense has decided to officially put BMPT-72 combat vehicles into service. On May 9, 2018, BMPT-72 appeared for the first time in the parade of Victory Day in Red Square, Moscow.

Military experts say that the deployment of the BMPT-72 to the Russian army is in line with its new military doctrine. Accordingly, the Russian Armed Forces must ensure the ability to proactively attack that main battle tanks play a leading role. In addition, Tank Support Fighting Vehicles such as BMPT-72 will assume the task of supporting in urban combat environments.

A further evolutionary version is under development, BMPT-72 Terminator 3. The Terminator 3 will be based on Armata Universal Combat Platform and have an automatic gun turret and in the future may have integrated air defense systems and may be fully unmanned.

Bastion-P – The steel shield that cannot be pierced

T-90S – What makes it one of the best-selling MBTs in the world?

Black Eagle T-80UM2 – A super tank with outstanding power, but withered because of lack of money

ELVO Kentaurus – A good armored vehicle from Greece, but for some reason it has yet to be mass produced 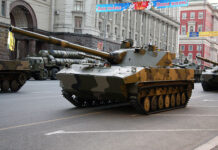 Australian ASLAV – A glorious journey, but is to be replaced by LAND 400 Phase 2

TAI Hurkus – The free bird of the Turkey

USS Wasp (LHD-1) – Among the largest of all amphibious warships, resembling a light...