The Bora class was built between 1987–2000. In the Soviet Navy it was known as Project 1239 or Sivuch, later renamed the Bora class in the Russian Navy.

Rarely does a warship in the 1,000-ton segment have such a massive and terrifying arsenal as Russia’s Bora class. This is a class of hoverborne guided missile corvettes currently operating in the Black Sea Fleet of the Russian Navy. The class consists of two ships, the Bora 615 and the Samum 616. They are one of the few surface combat ships built solely for marine combat purposes, rather than troop landing or transport.

The Bora class was built between 1987–2000. In the Soviet Navy it was known as Project 1239 or Sivuch, later renamed the Bora class in the Russian Navy. It is one of the largest combat sea vehicles with catamaran design with a displacement of 1,050 tons, a length of 66 m, a beam of 17 m, and a draft of 3 m.

The Bora class was designed primarily for coastal defense operations. The key design feature of this hydrodynamic configuration is an air cushion that separates the hull from the water surface, combined with maintaining contact with the water surface by means of sidewalls. The latter provide very low resistance to motion of the ship, but significantly reduce air loss from the air cushion area, partially unload the cushion, increase course-keeping stability and ship steering performance.

The Russian missile carrying hovercraft is meant to carry out missile attacks on ships. It is the largest military hovercraft unmatched anywhere in the world. With the displacement of 1000 tons, the craft can reach a maximum speed of 52 knots, a range of 2,500 nmi at 12 knots. In addition, intermediate speed modes with reduced air supply to the air cushion zone are available. Endurance is 10 days, with a crew of 68 sailors.

The missile hovercraft is intended to combat surface ships, fast boats and other enemy’s transport within all water area of closed sea battle zones and in close region of open seas. It is armed with 8 Mosquito missiles which can strike targets on the sea and on land. The hovercraft has 20 anti-aircraft missiles, an artillery complex, a machine-gun and an interference creating device.

Despite possessing very high speed, powerful arsenal, but Bora is not appreciated by analysts for its overall combat ability. These vessels are quite expensive and operating costs are high. Despite carrying strong weapons, Bora is only capable of coastal combat. Perhaps that’s why the Russian Navy only built two of this class. Although it has never been in a war, the number of incidents and breakdowns is constantly increasing, so many people think that these craft does not have much real combat value.

Beriev Be-12 Chayka: Old Birds But Still Useful To Russia 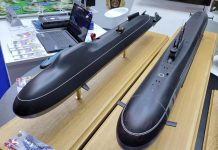 Extended Range For F-15EX: Outperform Any US Fighter

Shenyang J-16 – The aircraft is known as the Chinese sword

What Weapons Did Russia Use In The Attack On Ukraine?