Although somewhat similar in appearance to the Russian BTR-80, the BTR-3 is an entirely new vehicle rather than an update of the existing vehicle.

The BTR-3 is designed to be able to perform multiple roles, such as carrying troops, weapons and other supplies to support armed forces on the battlefield. It can be used as a reconnaissance, combat support and patrol vehicle. The hull of the BTR-3 is designed with all-welded steel armour, which provides maximum ballistic protection to troops against small-calibre automatic weapons. The body of the vehicle is lined with Kevlar liner for better protection.

Basically, the design of the BTR-3 is quite similar to the previous Soviet-era BTR wheeled vehicles, with a weight of about 16.4 tons, a length of 7.65 m, a width of 2.9 m, and a height of 2.8 m. The crew of 3 includes commander, gunner and driver. The passenger compartment can accommodate 6 soldiers. The armor provides protection against small arms fire and artillery shell splinters. It is fitted with NBC protection and automatic fire suppression systems.

The BTR-3 has greater internal volume, more powerful and fuel efficient engine, and many other improvements over the BTR family. It was powered by a Deutz AG engine, with 326 hp. The maximum speed is 85 km/h, the range is 600 km. This APC is fitted with a central tyre pressure system, that allows to adjust the tyre pressure to suit terrain conditions. Also it is fitted with run-flat tyres. The BTR-3 is fully amphibious. On water it is propelled by a single waterjet.

Variants of the BTR-3 include: BTR-3U “Hunter”, BTR-3E, BTR-3DA, and BTR-3KSH. The BTR-3U is fitted with the one-person KBA-105 “Shkval” unified fighting module which can accommodate 30mm gun, 7.62mm coaxial machine gun, 30mm automatic grenade launcher and anti-tank guided weapons. This module design is versatile, but can also with another turret. The sighting systems include a commander’s 1PZ-3 observation periscope and a TKN-4S Agat stabilised sight which is integrated with the missile fire control system.

By far, the largest foreign operator of the BTR-3 is Myanmar, with a contract around 1,000 vehicles. Other operators include UAE, Azerbaijan, Chad, Ecuador, Iraq, Kazakhstan, Nigeria and Thailand.

Dardo IFV – The Battlefield Taxi of the Italian Army 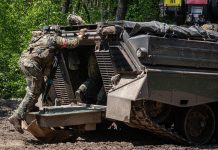 Marder IFV – Still A Respectable Warrior After Half A Century

Nimr APC: A Direct Competitor To The American Humvee And The Russian Tiger

BMP-2: An Agile And Reliable Friend Of Infantry

CASA C-295 – The transport aircraft has gained a solid position in the world...

Myasishchev M-4: A Formidable Opponent of the B-52 Stratofortress