Officially made public at China’s National Day parade on October 1, 2019, the Dongfeng-41 or DF-41 intercontinental ballistic missile, which observers believe will become the foundation for China’s strategic deterrence capacity.

With a range of up to 15,000km, greater than any missile on earth, theoretically, if launched from China, the Dongfeng-41 could reach the US mainland in just half an hour.

DF-41 is based on an 8-axle launcher vehicle and is similar in concept to Russian road-mobile ICBMs such as Topol-M and Yars. First test launch of this missile was made in 2013 and the second followed in 2014. Some sources report that the DF-41A missile was fielded in 2016 or 2017.

The missile reportedly has a top speed of Mach 25, and to be capable of MIRV delivery. The development of the MIRV technology is reported to be in response to the deployment of the United States national missile defense system which degrades China’s nuclear deterrence capability. Though there have been reports that the DF-41 can carry 6 to 10 warheads, analysts think it most likely carries only three warheads, with the additional payload used for many penetration aids.

Chinese military scholars hail it as one of the most modern and lethal weapons in the world. The DF-41 is a solid-fuel missile. This missile is extremely devastating and can wipe out entire countries. This missile has internal navigation system with indigenous Chinese BeiDou satellite navigation system update. It could be accurate to 150 meters, or possibly, even more accurate.

The chassis of the DF-41 is a special Taian HTF5980 16×16 configuration. This vehicle has some degree of cross-country mobility and can travel over various terrain. Though it is mainly intended to be used on hard surface roads. The missile is seated over the entire length of the truck and even extends beyond the bow. Prior to firing, the missile is raised in its cradle and made vertical to begin its trajectory. It also be launched from other platform such as rail, or from a reinforced underground silo housing.

China currently possesses about 290 nuclear warheads, a modest number compared to 6,185 nuclear warheads of the United States. However, in developing missiles like the DF-41, China has upgraded and will likely expand its nuclear arsenal.

9K52 Luna-M: The Predecessor Of The Famous OTR-21 Tochka

Military Comparison Of Taiwan And China In A Potential Confrontation 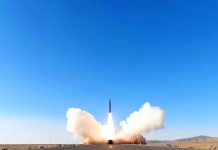 DF-17: China’s Carrier Hunter’s First Show – A Tough Message To The US

Sea Fighter FSF-1 – What is special about the US $200 million warship?

Russia-UAE Co-Production of SU-75 Checkmate – What Risk For the US?