The F-111 was considered the most advanced new generation fighter-bomber of the US Air Force in its time. The US brought F-111 into Vietnam in the hope of changing the outcome of the war. Unfortunately for them, even the most modern aircraft can be knocked out, somehow.

In March 1968, the US Air Force took the first six F-111A to Takhli base in Thailand. On March 18 of that year, starting to engage in battle, the F-111s joined forces with the F-4s to attack North Vietnam.

But after only 10 days, the first F-111 crashed in western Ha Tinh, explained by the Americans as an accident, while North Vietnam reported that it was shot down by the anti-aircraft artillery of the 280th Regiment.

On March 30, 1968, the anti-aircraft missile defense of Vietnam for the first time shot down an F-111 in the sky of Ha Tay. This was the excellent battle of the 64th missile battalion with only 2 missiles, manual guided. The F-111 was destroyed at very low altitudes.

By the end of April 1968, the third F-111 crashed in a mission in the North of Vietnam, explained by the US, due to technical problems. Within 1 month, 55 missions, and 3 F-111s were crashed when trying for the first time in the Vietnam battlefield. The Pentagon could’t accept this result.

The US Air Force had to rush to withdraw the rest to the factory to continue researching and perfecting this super fighter-bomber. After the first bitter defeat in Vietnam, F-111 had undergone a comprehensive modification both in technical and tactical terms. And it was not until 1972 that it returned to the old battlefield.

Back to the old battlefield

In 1972, F-111 returned, participating in Operation Linebacker and Linebacker II, with a powerful force and more careful preparation.

48 F-111s were divided into 3 groups, deployed at Takhli base of Thailand, and started night missions in northwestern Vietnam.

From the experience gained, the US Air Force had adjusted its missions wisely to ensure more safety for the F-111:

On the battlefield, F-111 only bombs coordinates like B-52. They hit key points on North Vietnam’s motorized traffic routes such as ferries, bridges, and steep passes with various bombs. The time interval between air strikes on each key point was calculated enough to prevent enemy engineers from repairing, overcoming and causing traffic jams.

When replacing the B-52 squadrons by the F-111 squadrons, the frequency of the sorties had to increase, as the F-111 could only carry about 11 tons of weapons while the B-52 was 30 tons. Many key points were subjected to a round of bombardment every 15 minutes, throughout 24 hours. These missions were often successful, because the F-111s flown at altitudes below 500m, at high speeds, so the opportunity to fire them was less than 7s, very difficult to destroy.

For missions in the North, the F-111 only carried out night attacks. This role was previously undertaken by A-6A and RF-4C aircraft. Despite its low efficiency, it caused a lot of fatigue and stress for the enemy air defense forces, when they were on duty all day and night.

F-111 had good terrain-following radar system, faster, more powerful and can carry the number of bombs 2.5 times F-4. It was especially capable of performing on bad weather days, while other aircrafts have to stay at the airport. After appearing, F-111 had turned its predecessors into amateurs. F-111 flying alone at night at an extremely low altitude, wriggling terrain to disable enemy radar, as well as optical devices.

How did Vietnamese shot down F-111 fighter-bombers?

Despite being a modern warplane, during the raids on Hanoi and Hai Phong during the Operation Linebacker II in 1972, against North Vietnam, five F-111A were shot down, out of a total of 48. The loss rate was 5 out of 48, or more than 10%, a rate that was too high for Americans to expect.

According to information from Vietnam, the Vietnamese have experienced dealing with low-flying aircraft before. They were ambushed and waited on the familiar path of the enemy. It was important to correctly judge the flight route that F-111 will take.

Throughout the expected flight route, they deployed ambush forces with a variety of weapons, including low-range artillery, 37-mm anti-aircraft artillery, and even rifles. Hanoi capital at that time had nearly 200 such battlegrounds.

The North Vietnamese had set up observatories, far away, there were soldiers silently on duty day and night. The system of military observatories, plus local stations, forms a dense observation network around Hanoi.

Although at night, but because F-111 flew very low, the observatory sometimes saw its silhouette passing, accompanied by the roar of the engine. When F-111 was detected, scouts must immediately notify it, either via radio or wire communication.

When the trail of bullets of the front unit fired up, it was a signal for the rear units to promptly fire. All guns and anti-aircraft artillery turned in a predetermined direction, ammunition on the barrel, ready to fire when ordered.

They fired everything they could, forming a bullet screen with depth, stopping the flight route of the F-111. Of the thousands of thousands of small bullets, only one hit at the critical spot, even the modern F-111s must fall.

During Operation Linebacker and Linebacker II, the F-111 made 4,000 sorties. Although some were shot down, the F-111 was still recognized as the safest flight profile of the US during the Vietnam War.

After the Vietnam War

After the Vietnam War, F-111 continued to be used in the war in Cambodia, the Libyan war in 1986, the Gulf War in 1991. In these battlefields, due to the absence of worthy opponents, American aircraft did not face many difficulties. Only a few F-111s were defeated in all of these battles.

The F-111 was in service with the USAF from 1967 through 1998. F-111 was also seen in Australian service. The Australian government ordered 24 F-111C aircraft to replace the Royal Australian Air Force’s English Electric Canberras in the bombing and tactical strike role. The purchase proved to be highly successful for the RAAF, although it never saw combat. 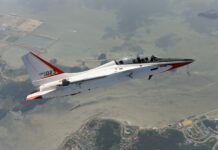 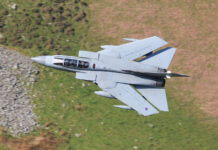 Panavia Tornado ADV – Once upon a time, it was the mainstay of the whole Europe 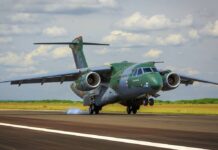 ROKS Dokdo (LPH-6111) – The power of Korean amphibious assault ship, like a light...

Revolution MBT – The Leopard 2RI of Indonesia, the most powerful MBT in Southeast...

Admiral Kasatonov (431) – The Stealthy “Aegis” Frigate Of The Russian Navy

Three US aircraft carrier combat groups are operating at the gateway of the South...