Currently, the Chinese Navy and Air Force are using the BZK-005 long-range UAV. It is known as China’s Global Hawk with an estimated range of 2,400 km and a maximum endurance of 40 hours.

BZK-005, designed by Beihang University’s UAV Institute and Harbin Aircraft Industry Corporation, has been in development since 2000. It underwent testing and verification in 2006, before being finalized and delivered around 2007. The Chinese UAV has a length of about 9 meters, a wingspan of 19 meters, and a maximum take-off weight of 1.25 tons.

BZK-005 has a few stealth features integrated into its design. It is believed that a satellite data link antenna is held in its large upper body dome. Under the body there is an optic-electric sensor system which is believed to be its main sensor. It is expected that BZK-005 has cruising speed of around 170 km/h, service ceiling 8,000 m, max takeoff weight is around 1,200 kg, max payload over 150 kg.

On the whole, the many technical achievements of the Long Eagle UAV broke a number of domestic records and filled the gap, making China’s high-altitude reconnaissance drones into the world’s most advanced ranks. The actual role of this drone is like a satellite with wings, which has profound implications for China’s military to master the modern combat mode. 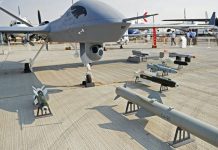 What Is The Superiority of the Chinese J-20 2-seat Fighter?

Wing Loong-10: The Advantage of “Made in China”

JS Izumo (DDH-183) – Has similar capabilities as light carriers currently in service around...