In addition to M41 Bulldog, M48 Patton, during the Vietnam War, the US Army also deployed a few special tanks, including the M551 Sheridan. It was one of the most modern light tanks of the US Army at the time. No generation of Soviet light tanks was comparable.

If the Soviet Union could only drop infantry fighting vehicles from transport aircraft, the Americans could even drop light tanks through parachutes. The M551 Sheridan is the last light tank in service with the US Army. So far, no vehicle has been able to replace Sheridan’s role.

Armed with super-powerful firepower, extremely fast maneuverability, ironically, the series of days of fighting in Southeast Asia was a nightmare to drown the American M551 Sheridan light tank.

Talking about the power of the M-551 Sheridan, military experts said that this was a very special light tank. The development of the M-551 Sheridan tank began in 1959 by General Motor, it was a program known as Armored Reconnaissance, or Airborne Assault Vehicle. The first prototype was released in 1962 and mass production began in 1966. A total of 1,662 M551s were produced until 1970. Total cost of program was $1.3 billion.

The M-551 was named in honor of the American Civil War hero, General Philip Sheridan. The M-551 tank was created to replace the role of M-41 light tanks and M-56 self-propelled anti-tank guns in the US Army.

American engineers built the M-551 so that this light tank could be dropped by parachute at low altitude. This feature will be effective when you need to move the tank to a war zone in the situation that does not allow the aircraft to land, or the enemy’s anti-aircraft fire is too strong. The low altitude drops were made using Low Altitude Parachute Extraction System. A special pallet absorbed most of the landing impact during landing. The Sheridan can be rigged for low-velocity airdrop from C-130, C-141, and the C-5. The crew does not ride in the tank during extraction, but parachutes from another plane. On landing, they go to their tank, release the lines, and drive it away. In fact, the M-551 was the only tank capable of parachuting by the US Army.

In exchange for this light weight, Sheridan has only the hull made of aluminum alloy – like the M113 armored vehicle used by the US during the Vietnam War.

The only steel part on the M551 tank was its turret section. The front armor of the M-551 can withstand 20mm armor-piercing rounds, the remaining positions only withstand 14.5mm bullets. M-551 Sheridan was also integrated with NBC protection system.

The low profile turret was located in the center of the upper hull. A lo-angled sloping glacis fitted at the front of the hull, while the other sides were straight-faced.

Engine and transmission were located at the rear of the hull. The suspension was of the torsion-bar variety, and the track system on each side has five rubber-tired road wheels. The track idler was set to the front while the drive sprocket was at the rear. No return rollers were provided for the tracks.

Due to its light weight, the vehicle can wade after preparation and move across the water by its own two tracks. Its swimming speed reached 5.8 km/h.

Sheridan’s standard crew was four, including the driver, the commander, the gunner, and the loader. The driver was seated at the front center hull, while the rest occupy the respective positions in the turret.

In terms of firepower, the M-551 Sheridan was equipped with a 152mm short barrel gun, capable of firing ordinary projectiles and MGM-51 Shillelagh anti-tank guided missiles.

Sheridan’s 152mm main gun can take down their contemporaries at close range, but because the barrel was too short, it would be less accurate at long range. Therefore, it was most effective to use this gun to support infantry fire. Secondary armament consists of a 7.62mm coaxial machine gun and a 12.7mm heavy machine gun on the roof of the turret.

In theory, the MGM-51 Shillelagh anti-tank missile could destroy all types of tanks at that time, even at long distances. But because Shillelagh was too complicated in control and maintenance, it was never used on the battlefield (Vietnam War), except for crew training purposes.

Thanks to its light weight and compact design, it allows Sheridan to work well in mountainous, humid and muddy terrain like in Vietnam. It was also Sheridan’s first battlefield right out of the factory.

Beginning in 1966, the commander of the US Army on the southern battlefield of Vietnam at that time was General Westmoreland, affirming that the battlefield needed M551 Sheridan. However, contrary to all expectations, the Vietnam war completely submerged Sheridan in frustration.

At that time, the M551 used a single type of ammunition, so the US logistics unit thought that ammunition for this tank would not be enough when it embarked on a large-scale war like in Vietnam. It was not until 1968, when the Vietnam War reached its climax, the US Army fully prepared ammunition for M551 to join the war.

At the Vietnam battlefield, after many delays, the first Sheridans arrived in January 1969. By the end of 1970, at least 200 M551s had been in South Vietnam.

On February 15, 1969, only about a month after arriving in Vietnam, a M551 light tank detonated an anti-tank mine of the Liberation Army. The explosion was not too strong but detonated a 152mm shell inside which destroyed the tank.

The main missions of the M551 on the Vietnam battlefield include reconnaissance, night patrol and clearing roads. It was estimated that the Sheridans had performed 520 missions, traveling about 50,000 km during their time in Vietnam.

Fierce battlefield has pointed out many disadvantages of this tank. It was very vulnerable to grenades and mines, the main gun showed many cracks after continuous firing and the recoil of the gun was too great for a light tank. Most of the units equipped with M-551 had requested to resolve the issues that arise.

In addition to problems during combat, Sheridan was also frequently damaged, causing it to fail before it could fight. According to an American report, in February 1969, 74 M551s were sent to Vietnam. But only three months later, 16 serious mechanical errors were recorded, 41 failed shots, 140 failed shells, 25 engines were burnt, the turret encountered 125 electrical errors, most machine gun ammunition must be stored outside, increasing the risk of fire and explosion, as the internal space was too limited.

Another reason why M551 did not have success in Vietnam, there was no opponent to confront it. With a 152mm heavy gun, Sheridan never had a chance to encounter a liberation tank.

Simply, the South Vietnamese battlefield was primarily a guerrilla war, tanks of the liberation army first appeared in Vay village in 1968 – very far away from where Sheridan was arranged. A tank created against tanks but without a target to fight, of course, not well known.

It wasn’t until 1991, during the Desert Storm campaign, the M551 Sheridan had the opportunity to fight tanks. Accordingly, it launched six MGM-151 missiles to hit the T-55 tanks of Iraq. However, compared with the glorious feat of M1 Abrams before Iraq’s T-72, the achievement of the M551 was nothing. It was also the battle that put an end to American light tanks.

Overall, the M-551 tank was a fairly innovative American weapon, but due to many defects, it has faded and was replaced in the reconnaissance role by M-3 Bradley.

Sheridans have been phased out since 1978, although until 1996, the last M-551 was officially removed. Attempts by the manufacturer to improve them were useless.

Currently, the US Army has not had a single light tank since the M551 Sheridan was retired in 1996. That’s why the US Army is trying to find a light tank that can be easily transported, good maneuverability, while still having strong firepower.

From that fact, the US program of manufacturing light tanks, called “Mobile Protected Firepower”, was born. The program is currently at an early stage, so the new type of tank is expected to appear as early as 2025. 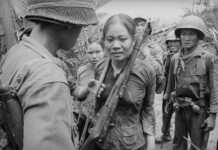 Why did the US go to war in Vietnam?

Patriot MIM-104 Is Ukraine’s Dream, And Kiev Wants It For Free

The Most Produced Tanks In World Military History

The Most Costly Wars In American History

What Spoils Did Vietnam Get After 1975?

Fatal Weakness of the US M1 Abrams Main Battle Tank

The Popular American Grenades During the Vietnam War

Americans in Vietnam – US Helicopters Used in the Vietnam War

Short C-23 Sherpa – Once a US Army Valuable Asset, Landing Where the C-130 Could Not

IAI Lavi – An Israeli Ambitious Project But Unfortunately Was Soon...