The Mil Mi-28, known by the NATO codename Havoc. It is a modern combat helicopter able to destroy armoured and unarmoured combat material, low and slow flying airborne vehicles and other battlefield targets.

According to the TASS news agency, within the framework of the International Military – Technical Forum Army 2019 taking place at the Patriot exhibition center in the Moscow Region. The Russian Helicopter Company introduced the first modernized Mi-28NM attack helicopters thanks to experience from the war in Syria.

In order to gain valuable experience to help make the Mi-28NM helicopter more powerful, modern and safer not easy, many Russian soldiers and pilots have spilled blood in Syria. According to TASS, Russia’s modernized Mi-28NM attack helicopter will be fitted with a new guided missile with a range of more than 25 kilometers.

The first Mi-28NM helicopter was made in 2009. Being an upgraded variant of the Mi-28N Night Hunter attack helicopter. The Mi-28NM helicopter gunship is designed to search for and destroy low-speed air targets, tanks, armored and non-armored vehicles as well as enemy manpower in daytime and at night, in all weather conditions.

The Major upgrades on the Mi-28NM are consider that contributed from previous generations of Mi-28s sent to Syria in 2016. During the Palmyra war 2016, Mi-28 helicopters were recorded to support effectively for the Syrian Army to retake the city. On this occasion, we will talk about the history of the Russian Mi-28 helicopter.

With a powerful array of weapons and high maneuverability, able to operate in many types of terrain, attack helicopters are increasingly used by many troops. Attack helicopters are equipped with weapons to attack ground targets such as infantry, armored vehicles and enemy structures with automatic guns, machine guns, rockets, and precise guided missiles. The Mi-28 Havoc is considered one of the best attack helicopters today.

The Mil Mi-28, known by the NATO codename Havoc. It is a modern combat helicopter able to destroy armoured and unarmoured combat material, low and slow flying airborne vehicles and other battlefield targets. The Mi-28 is developed in the Soviet Union and the Russia in the 1980s to 2000s by Mil. The first flight was conducted on 10 November 1982 and entered into service in 2008.

The story of the Mi-28 began in 1972, after completing Mil Mi-24, the Soviet Union requested the development of a high-performance attack helicopter. Its intended role was to fight against enemy tanks and helicopters and include helicopter landing operations.

The design work on the Mi-28 began under Marat Tishchenko in 1980, two prototypes were completed and the trial phase was completed in 1984. But in October 1984 the Soviet Air Force chose the more advanced Kamov Ka-50 as the new anti-tank helicopter, Mi-28 development continued, but given lower priority.

The Mi-28A was first launched at the Paris Air Show in June 1989, but later the Mi-28A program was canceled because it was deemed uncompetitive with the Ka-50, in particular it was not all-weather capable.

In August 1996 Mil rolled out a prototype of the day and night capable version, the Mi-28N Night Havoc. The first production Mi-28N took its first flight in April 2004 and began flight testing with the Russian Air Force in June 2005. The first serial Mi-28N was delivered to the Army on 5 June 2006. By 2015, 67 Mi-28Ns were planned to be purchased, when the Mi-24 was to be completely replaced.

Mil also developed an export variant of the Mi-28N, designated Mi-28NE, and a simpler day helicopter variant, the Mi-28D, based on the Mi-28N design, but without radar and forward looking infrared system.

Currently a total of nearly 70 improved Mi-28N attack helicopters are in service with the Russian Army. The type is being actively marketed for export customers.

The design of this helicopter is similar to well-known older battle helicopter Mi-24 Hind. The pilot and the navigator officer are accommodated in two separate cockpits in tandem configuration under individual canopies. The fuselage of the Mi-28 has a bay fitted with a hatch door. The bay can accommodate three people for the rescue of downed friendly air crew. The main rotor head has elastomeric bearings and the main rotor blades are made from composite materials. The tail rotor is designed on a biplane configuration, with independently controlled X-shaped blades.

The helicopter has non-retractable tricycle tailwheel type landing gear. The energy absorbing landing gear and energy absorbing seats protect the crew in a crash landing or in a low-altitude vertical fall. The crew are able to survive a vertical fall up to 12 metres per second. When the helicopters altitude allows parachute operation, the crew can bail out in an emergency. If the choice is made to bail out then it is possible to jettison the wings and cabin doors in order to remove any obstruction which could otherwise be caused by the protruding parts of the helicopter. The Mi-28 has a fully armoured cabin, including the windshield, which withstands impact by 7.62mm and 12.7mm bullets and 20mm shell fragments.

The Night Havoc helicopter retains most of the structural design of the Mi-28. The main difference is the installation of an integrated electronic combat system. Other modifications include the main gearbox for transmitting higher power to the rotor; new design of high efficiency blades with swept- shaped tips; an engine fuel injection control system for high power operating modes.

The main sensors of the integrated electronic combat system are the microwave radar antenna mounted above the rotor head and a forward looking infrared system. The helicopter is able to hover under cover with just the radar head looking over trees, buildings or high ground. The integrated combat system uses onboard processing to display the helicopter location on a moving map indicator, and to show the flight, systems and target information on the cockpit liquid crystal displays. The crew are equipped with night vision goggles. The pilots are able to perform nap of the earth flight missions in day or night conditions and in adverse weather.

In comparison with the AH-64D Longbow Apache, the 10.5 ton Mi-28N is some 2.5 tons heavier, partly due to its more powerful cannon. In general the two helicopters have similar flight performance. Two Klimov TV-3-117 engines of 2,200 horsepower each allow the Russian aircraft to show a maximum level speed of 300 km/h and maximum climb at sea-level of 13.6 meters per second.

The Mi-28 is equipped with a 30 mm Shipunov 2A42 autocannon housed in a turret under the nose. Twin 150-round ammunition boxes are co-mounted to traverse, elevate and depress together with the gun. So a total of 300 rounds of ammunition are carried for the main gun.

One common Mi-28 armament are a pair of 8 Ataka missile racks along with 2 B-13L rocket pods, each able to carry 5 S-13 rockets. Other rocket options include two B-8 rocket pods, each able to carry 20 S-8 rockets.The Ataka missile’s guidance is by narrow radar beam, and maximum range of the missile is 8km. The missile has a tandem shaped-charge warhead for penetration of 950mm to 1,000mm armour.

The Mi-28 can also carry the IR guided R-73 air-to-air missiles, the Kh-25 air-to-surface missiles as well as up to 500 kg aerial bombs. Pilots can use night vision goggles and a helmet-mounted target designation system and display. All controls are on-board equipment integrated into a single system.

Russia was to develop and test a prototype Mi-28 with next generation attack helicopter features by 2017. This improved version is named Mi-28NM and has been in development since 2008. The Mi-28NM helicopter gunship is designed to search for and destroy low-speed air targets, tanks, armored and non-armored vehicles as well as enemy manpower in daytime and at night, in all weather conditions.

Specific characteristics are not known, but may include a low radar signature, extended range, advanced weapons control systems, air-to-air engagement capability, and increased top speed of 600 km/h. The variant includes a new helmet imaging and targeting system designed to display visual information for aiming at targets in any field of view.Russia is still the main operator of Mi-28 Havoc. Export versions have been provided to a number of interested countries including North Korea, Iraq and possibly India, Algeria and Venezuela. 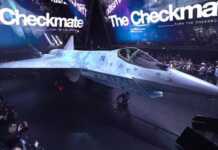 Hold your breath waiting for the Mysterious Russian fighter to appear

Aged but healthy, the MiG-21 is still the NIGHTMARE of the WEST

With the Israeli Trophy, the ERA of the Soviet RPG-7 “FIRE God” is OVER

Arquus Scarabee – New Modern Combat Vehicle Of The French Army That Moves Like...

JS Izumo (DDH-183) – Has similar capabilities as light carriers currently in service around...

Why is China still Lack of Weapons despite its Huge Defense Budget?