As a product of the cooperation between Obrum and BAE Systems, the PL-01 tank is advertised as the world’s first stealth tank with superior features compared to super tanks of USA or Russia.

Recently Russian media have suggested that in the near future Poland plans to enhance the combat capabilities of its armed forces, including the introduction of new weapons. According to some sources, Warsaw will increase its annual military budget from 3 to 7% until 2020 and the tank brigades are considered the backbone of the war.

Currently, there are about 892 tanks in service with the Polish Army, the fourth largest tank team in the NATO forces, after the US, Turkey and Greece, all of them are 3rd generation tanks. In addition, Poland is currently the only European Union member developing a new generation main battle tank called the PL-01.

As a product of the cooperation between Obrum and BAE Systems, the PL-01 tank is advertised as the world’s first stealth tank with superior features compared to super tanks of USA or Russia.

The PL-01 tank project was silently researched and developed by Polish army for a long time and very secretly. Almost all information about this project was not disclosed to the public until the Polish army officially introduced a real model of PL-01 tank at the International Defence Industry Exhibition in Kielce on September 2, 2013.

This tank was aimed to meet a possible Polish Army requirement. Some sources even reported that this tank could enter service in 2018. However, at this time, this has not happened and this tank is still just a Polish technology demonstrator.

The design of the PL-01 is unlike any tank ever introduced in the world and this can be considered as the starting point for the new generation of tanks of mankind.

The tank will be manned by a three-man crew, the driver is located at the front of the vehicle’s hull, with the commander and gunner also located in the hull and the unmanned turret mounted in the rear. In addition, there is a rear compartment in the hull which can accommodate four soldiers.

At the heart of the PL-01’s capabilities is its stealth technology. PL-01 is covered with special “temperature controlled wafers” allowing it to blend with the infrared signature of its surroundings, this makes the tank invisible to infrared sensors.

The vast majority of targeting sensors on the battlefield today rely on the infrared band of the electromagnetic spectrum to do their bidding. The PL-01 attempts its almost magical infrared signature reduction via the installation of temperature controlled wafers that blanket its exterior. This chameleon’s skin of sorts, allows the tank’s skin to match the infra-red signature of its surroundings. It does this by processing what small infrared sensors mounted around the tank detect, and then displays a pattern on the tank’s honeycomb-like covering that best matches the infrared data collected.

And, more amazingly, these hexagon-shaped wafers can be manipulated to make the tank look like a smaller object such as a car. The PL-01 also lowers its infrared signature through cooling and dispersing the exhaust from its diesel engine. The PL-01 tank is also said to be almost entirely coated with radar absorbing material, and the vehicle’s very low-profile and faceted design is said to reduce radar returns in a sizeable manner.

It was planned that the new Polish tank will have modular protection with multi-layer ceramic-aramid armor. Damaged add-on armor modules would be easily replaced in field conditions. Also newer modules could be fitted once more advanced armor is available. It is claimed that front armor with add-on armor will provide protection against 30 or 40 mm armor-piercing rounds. It was planned that all-round protection will be against 14.5 mm armor-piercing rounds. Such level of protection makes this vehicle closer to modern light tanks than true main battle tanks. It was planned that the hull will have a high level of protection against landmines and improvised explosive devices. This tank was designed to withstand explosions equivalent to 10 kg of TNT anywhere under the hull. Automatic fire suppression and NBC protection system would be fitted as standard.

The PL-01 will also sport active defenses in the form of a Trophy like system, where electronic actively scanned array radars will be installed around the turret. Once a high-speed projectile is detected moving at a threatening vector, the system will fire one of its countermeasure rockets to intercept and detonate infront of the incoming projectile, thus killing it, or greatly decreasing its kinetic energy, before impacting the tank.

Also, laser detection sensors will be distributed around the tank so that early warning of an imminent enemy attack could initiate automatic ejection of infrared and laser masking smoke mortars, which are mounted flush with turret to keep the tank’s radar signature low.

The primary weapon of the PL-01 will either be a 105 mm or 120 mm gun fed by an autoloader that ensures a rate of fire of six rounds a minute. The gun will fire both conventional anti-tank rounds and anti-tank guided missiles.

PL-01 can carry 45 rounds for the main gun, 16 of which are located inside the robot turret with the remainder stored within the hull. The tank is also armed with a 7.62 mm caliber UKM-2000C machine gun with 1,000 rounds of ammunition.

A remote-controlled weapons station on the turret can accept a 7.62 mm or 12.7 mm machine gun or a 40 mm automatic grenade launcher. The turret will also house an active protection system to neutralize incoming Anti-tank guided missiles or RPGs. OBRUM revealed the turret can be changed depending on the type of mission undertaken by the tank.

The PL-01 will be equipped with a 940 horsepower diesel engine coupled to a torque converter, automatic gearbox and driving assistance mechanism. The suspension is based on seven wheels, with the drive shafts having active damping of torsion bars mounted on the first and last two pairs.

The vehicle can reach speeds of up to 70 kilometres per hour on paved roads and 50 kilometres per hour in rough terrain with a maximum range of 500 kilometres. It can successfully climb an inclination of 30 degrees, cross ditches and trenches to a width of 2.6 metres, and cross water obstacles with a depth of up to 1.5 metres without preparation, and up to 5 metres deep with preparation.

The PL-01 will be offered in multiple formats, including a command vehicle, an armored repair vehicle and a mine clearance vehicle. This will allow a forward deployed armored column to work as a single team, using common parts, to accomplish various tasks.

There’s also controversy as to what the PL-01 really is. Some media reports describe the futuristic-looking PL-01 as a light tank while others call it a Direct Support Vehicle.

Whatever the case, the PL-01 seems like a fantastic concept as it takes a modular approach to proven and effective tank design, while also incorporating new technologies and signature control capabilities that are very intriguing to say the least.

Whatever the product is promoted is extremely impressive, we will have to wait and see if Poland and their British friends really revolutionize the tank as we know it.

Vietnam War PT-76 – Why Did This Light Tank Scared The American Soldiers?

M24 Chaffee – The First US Tank in the Vietnam Battlefield

Challenger 2 – Is this the best armoured tank in the world, surpassing even the Abrams and Leopard? 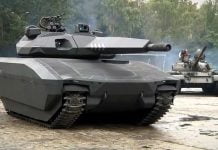 F-22 was few, now lost one, sadness of the US Air Force

Revolution MBT – The Leopard 2RI of Indonesia, the most powerful MBT in Southeast...