Taimur was built by China’s Hudong-Zhonghua shipyard and launched on January 29, 2021.

Pakistan and China have a strong military relationship. The two countries have participated in joint projects of fixed-wing aircraft, unmanned aerial vehicles, and now navies. A new class of guided missile frigates of Chinese origin has entered service with the Pakistani Navy, the Tughril class. This is a modern class based on the Type 054A surface warship of the People’s Liberation Navy. Two ships were commissioned in January and June 2022 respectively out of a total of 4 ships of the class. PNS Taimur F-262 is the newest frigate of the Pakistani Navy.

Taimur was built by China’s Hudong-Zhonghua shipyard and launched on January 29, 2021. It was officially commissioned on June 23, 2022. The Chinese shipyard completed the ship in 17 months. Possession of the advanced Type 054A frigates will greatly enhance the Pakistani Navy’s ability to defend its maritime borders.

The Type 054A is a multi-role frigate and is recognized as the backbone of the People’s Liberation Army Navy fleet of surface combatants with 30 vessels in commission. They have a length of 134 meters, a beam of 16 meters for a displacement of 4,000 tons.

Power is through a COmbined Diesel-And-Diesel arrangement involving 4 x Shaanxi 16 PA6 STC marine diesels driving power to 2 x Shafts astern. This provides the warship with a straight line, ocean-going speed in excess of 27 knots with an operational range out to 8,025 nautical miles. Additional range is granted by a helicopter that can be launched and retrieved from the stern-based helipad. As is common with frigates today, a full-service hangar is integrated in the design.

As part of its anti-surface warfare capabilities, the Tughril-class carries CM-302 anti-ship cruise missiles, reportedly capable of supersonic-speeds of up to Mach 3. Reportedly, Pakistan is currently developing a hypersonic anti-ship ballistic missile – dubbed the “P282”, for later use on the frigates. Other reports have also stipulated that the frigates may be equipped with the CM-401 anti-ship ballistic missile, capable of traversing at hypersonic speeds; however, this is yet to be confirmed.

The class also features one “PJ-26” 76 mm naval gun, primarily for neutralizing surface, or aerial targets. As part its anti-air warfare capabilities, the class features the LY-80N medium-range surface-to-air missiles, with a reported range of up to 70 km; the LY-80N, too, has often been compared to the Barak 8 surface-to-air missiles utilized by the Indian Navy, given the missiles’ similarities.

Installed systems include the SR2410C Active, Electronically-Scanned Array radar, the Type 517 VHF air-search radar, and the MR-36A series surface-search radar. A Type 347G system aids in fire control and a pair of Racal RM-1290 I-band navigation radars round out the suite. Passive or active sonar is carried through a hull-bow installation as well as a traditional towed-array unit.

The Pakistan Navy is currently undertaking an important renewal of its fleet, with the procurement of several modern platforms: In addition to these frigates from China, Pakistan will also commission new corvettes from Turkey and OPV from the Netherlands. It is also modernizing its submarine force. In 2016, Pakistan agreed to pay China $5 billion for the acquisition of eight Chinese Yuan-class type-041 diesel submarines by 2028 in order to shift the force balance with its archrival India.

JS Mogami FFM-1: Finally, the Lead Ship of Mogami-class Frigate has been commissioned

TF4500 Anti–Air Warfare Frigate: A Unique Surface Combatant Is Being Created In Turkey 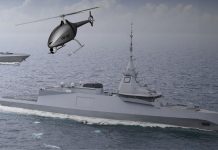 Amiral Ronarc’h class: The Future Frigates of the French Navy

Which Navy Has The Most Stealth Frigates in Southeast Asia? The Formidable-class

Is Russia’s Gepard 3.9 After All a Frigate, or a Corvette?

Beriev A-50 – Russia’s AEW&C aircraft, capable of commanding and controlling all air operations