The design of the ZBL-09 Snow Leopard was heavily influenced by both Western and Russian armored personnel carriers.

Developed since the 1990s by NORINCO, the ZBL-09 Snow Leopard represents a generation of fully modern, modular Chinese 8×8 Armored Combat Vehicles. This APC was first revealed in 2006. It is an advanced modular design, aimed at export customers. It is currently in mass production for the Chinese Army. ZBL-09 is also being proposed for export customers under the name VN-1. It was exported to Venezuela and possibly some other countries.

The design of the ZBL-09 Snow Leopard was heavily influenced by both Western and Russian armored personnel carriers. The vehicle has a weight between 15 ~ 20 tons, depending on the configuration. It has a length of 8 m, a width of 3 m, and a height of 2.1 m.

Standard crew is 3 people: the driver, commander and gunner, plus 9 soldiers in the passenger compartment at the rear. The operating crew is given modern conveniences and access to an all-digital Battlefield Management System for real-time threat assessment and heighted situational awareness. Communications are protected and integrated to serve alongside existing modern fighting vehicles.

Armor protection is against small arms fire and artillery spray though bolt-on armor can be used to address limitations in crew protection. An automatic fire suppression system is carried and an NBC kit is optional. Roof hatches are provided for and a rear entry/exit door is set at the rear hull facing for the passengers. Firing ports also allow occupants to engage external threats with their personal infantry weapons.

The powerplant is of German origin, the BF8L413F 4-stroke, 8-cylinder, turbo-charged, air-cooled diesel giving 320hp. Engine compartment is located at the front of the hull. Vehicle is fitted with a central tyre inflation system for improved cross-country mobility. The maximum speed can reach 100 km/h, The maximum operating range is up to 800 km. On the water it can swim at 8 km/h, which is propelled by two waterjets.

This Chinese APC is armed with a turret-mounted 30 mm cannon and coaxial 7.62 mm machine gun. The 30 mm cannon is similar to a Soviet 2A72, which is used on a number of Soviet/Russian armored vehicles and attack helicopters. The Snow Leopard can be also fitted with two rails for HJ-73 anti-tank missiles. This missile is out-dated comparing with modern Western designs, however it still poses threat to armored vehicles. Other turrets and weapon options are also available.

Polish Borsuk IFV: Time To Prove It In The Field

CH-4B In Pakistani Hands: “Made in China” Everywhere 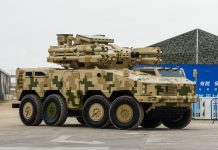 Chieftain MBT: Not the M60, This Is The Tank that scared the Soviet Union

How did the F-14 Tomcat become a super fighter?

What is China’s Ambition when Increase Its Defense Budget?

SURPRISED when ZU-23-2 TURNED into a self-propelled Cannon